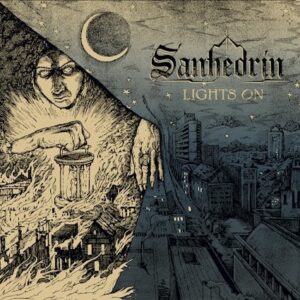 The timelines collide as Sanhedrin once again combines a modern lyrical twist to classic metal sound with their new album ‘Lights On’. The Brooklyn band are back again and are ready to dazzle the world with an incredible new album. Any fan of Sanhedrin will tell you that nostalgia and surprise come hand in hand with their songs, as they combine the classic sounds of older metal with modern twists that are uniquely them. Something timeless meets the here and now again and again; as the band is always keen to write music about what they consider to be important and meaningful to them, but in a way that allows them to reach out to the widest possible audience that they can.

And with the new album ‘Lights On’, modern and timeless don’t come more blended than this. Each song carries the rhythm of the classic metal anthems, with wild drum and guitar background combined with smooth but electric vocals reminiscent of AC/DC and Alice Cooper. With a track that would not be out of place headlining alongside the likes of Judas Priest and Iron Maiden, fans of classic rock, metal, and even power ballads can easily find something enjoyable here.

And for those that seek the modern twist, they needn’t look further than the lyrics. The eight tracks of the ‘Lights On’ album have all been written with the intention of reflecting an event that passed between 2020 to 2021, a time in which everything in the world felt out of place, backwards, and upside down. The entry song ‘Correction’ was released early on January 13th, and focuses lyrically on the (then) current state of the world that had been caused by the global pandemic. While not a time that anyone is likely to look back on fondly, it seems only proper that it is the first song of the track, as Sanhedrin consider it to be the event that shaped ‘Lights On’ into the album that it is today. The song is a steady but exciting tempo set to electric guitar riffs and drums while the lyrics reflect society’s reaction to the coronavirus and the chaos it brought with it.
The band’s reminiscent record then continues further as each song creates a powerful reflection of events from late 2019 into 2021. ‘Scythian Women’ focuses on an archaeological dig in 2019, wherein the bodies of four female warriors were uncovered in Russia. This track’s rhythm is much faster, almost echoing the tempo of horses riding galloping off into a battlefield. The lyrics themselves are incredibly reminiscent of a battle cry, with many lyrics being shouted as they speak of warrior women and warrior girls.
A final example is the track titled ‘Code blue’ focuses on an entirely different event, as this song’s lyrics reflect upon the current state of the Black Lives Matter movement and the attempts of society to create a falsified image of life in order to cover up the many years of police brutality. The rhythm is deliberately misleading here, creating a relaxing and seemingly happy tempo that attempts to distract you from the lyrics as they call people out on the sinful lies and falsehoods they create.

Ranging from groundbreaking discoveries to human rights movements, Sanhedrin has tried to get it all, and has done so in a way that combines powerful and important historical events with a classical metal rhythm that will have you nodding your head in time with the rhythm and in agreement with the message underneath. Both nostalgic and new; ‘Light’s Out’ is an album that has something for everyone, no matter what time period you want to hear from.

Recommended for fans of: Iggy Pop, City Morgue, Lamb of God. Who calls the demons of progressive metal at this hour? Named after the symbol of...
Read more

Recommended for fans of: Iron Maiden, Slipknot, Avenged Sevenfold. Bringing both new songs and new stories to the alternative scene with their latest album...
Read more

Ready the fleet and man the mosh pits, because CABIN BOY JUMPED SHIP have come sailing back into the alternative seas with a brand...
Read more