First up on the bill Low Red Moon  There’s no mistaking when this band are about to take the stage – their arrival is always announced by a ghillie-suited rabble-rousing monster inciting the crowd to dance. 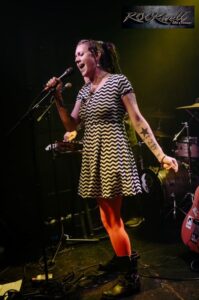 Once you get over the immediate visual impact, it’s quite hard to pigeonhole the sound of the band. Imagine, if you can, a blend of enigmatic Texas desert pop and swirly psychedelia, shot through with the clang and echo of surfy guitars. If that all sounds a bit introspective and moody, it really isn’t – Low Red Moon are out to make sure you have a good time. The exuberant dueling vocals in their set-closer put you in mind of the party band vibes of the B52s and there’s plenty of onstage abandon to leave everyone smiling by the end of the gig. If you see them on a bill, make sure you check them out if you’re the sort of person that enjoys any of the following: dancing, monsters, ghillie suits, mysterious electronic rumbles or haunted parties.

Next up the main event.  A band forming in 2018 through a shared love of fuzz boxes, Joe Meek and UFOs and together inventing ‘Space Surf.’  Upon discovering it already existed, they continue to reinvented it!  Despite being delayed by an over turned car on the M40, this psychedelic instrumental band lay down their intent from the initial few bars of the opening track, Tick Tock; 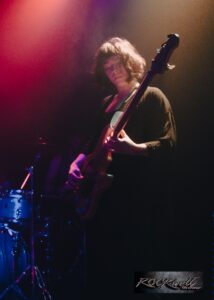 JAPANESE TELEVISION are here to blast the audience into a spaced surf rock frenzy. The moving bass line interjected with swirling reverb guitars is reminiscent of Hawkwind’s    Opa-Loka, all held together by a tight, infectious drumbeat whilst Ian Thorn’s harp and synth undertakes a melodic journey. Tick Tock is taken from JTV’s first EP released in 2018 and evidences the synchronicity between the band members, instinctively feeling dynamic changes, which are utilized to maximum effect. Furthermore, the bass groove has drawn the audience closer as heads start to move along with the vibe of the song. The band’s surf rock sensibilities come through with a recent release, ‘Bruce Willis.’ The song verges on the cusp of jazz by exploiting time and key changes to create a hint of musical tension before returning to the initial riff producing a piece of music that wouldn’t be misplaced in a modern day version of Andy Warhol’s Factory. 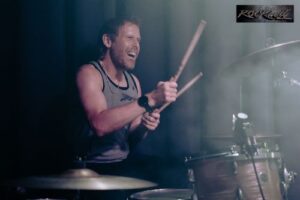 As the set continues, there’s a heavy dose of ‘Dick Dale‘ interspersed with the driving sensibilities of ‘Neu!’s Hallogallo‘ cleverly woven together to produce the shoulder shaking track ‘Lizard Moon.’ JAPANESE TELEVISION may wear their influences on their sleeves, but they have a distinctive spin on them all, and it’s this unique take on music that is causing many to sit up and take note. ‘Surfing Saucers‘ is a far darker sounding track with a beautifully crafted bassline that uses the whole register whilst the harp produces an eerie melodic line that would be suitably placed within Tarantino soundtrack. The richness of sound is enhanced by the resonance of the guitar and the drummer’s effective use of the crash, and when the drums drop down as the bass and synths take control it allows for an almighty crescendo. ‘Surfing Saucer‘ is another track from their first EP and this is recognised and truly appreciated by the increasingly enthusiastic audience. 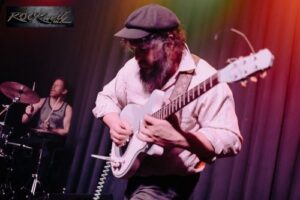 The set is scattered with brand new tracks including one on the setlist called ‘Morgue‘ that plays with subtleties of the chromatic scale and flirts between the major and minor whilst staying on the right side of melodic. The sinister representation of the song’s name comes through a haunting repetition of a very high note on the synth, which alludes to cult horror movies of the 60s and 70s, as the rest of the intricate guitar work keeps us firmly in the psychedelic field. As JAPANESE TELEVISION’s set draws to a close, they unleash the beast in the form of 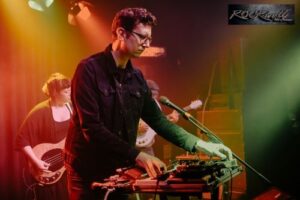 ‘Crocodile Dentist,’ a firm favourite with the crowd who are dancing with true enjoyment embracing the tempo increase towards the end of the song that culminates in an intense grand finale. The energy in the room is visible, with the band and the audience bouncing off one another yet the tight timing and connection between the musicians does not falter for a moment, it just intensifies. Pushing the curfew just a tad, Ian Thorn reckons they can squeeze in one last track and launch into ‘Bumble Rumble,’ which has a sparse segment at the beginning that leads perfectly into a gritty section that elevates the sound immensely resulting in a superb ending to a sublime 45 minute set. Knowing very little of their music, JAPANESE TELEVISION pulled me into their curious world purely through the construction and delivery of their live set, they are well worth seeing if you dabble in the world of psychedelia. And you know they must be good if Killer Wave have chosen to put them on. 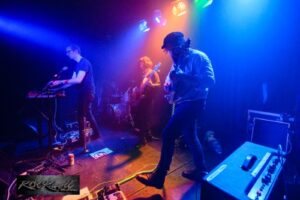 Okay before we go any further, it is always a challenge to try to figure out who is going to get booked to open...
Read more