On arriving at the venue, it was obvious from the fans entering that this was going to be a night of brutal music. I had been pre-warned this band “Conjured The Dead” so there was a feeling of anticipation as people filled the venue in their best battle jackets and boots. One guy, I’d had a brief chat with outside was dressed in full corpse paint, complete with boots, and long Jacket. Now that’s dedication…

BELPHEGOR are a band who have been around a long time, but unfortunately I personally hadn’t heard of until recently. An Austrian extreme metal band from Salzburg. Originally formed in 1991 under the name ‘Betrayer‘, until changing their name to ‘BELPHEGOR‘ in 1993. In that time, they had released several studio albums, EP’s, Live albums and visuals. Their first album titled ‘The Last Supper’ released by Lethal Records in January 1995. Moving on to 2021, BELPHEGOR have toured far and wide taking their Dark Demonic metal shows to Metal fans in there thousands everywhere. Their most recent album titled ‘Totenritual’ was released in 2017.  The bands 12th studio album is set for release in May 2022. When asked if I would attend and give an opinion on the band, I immediately hit BELPHEGOR into YouTube…. Being a bit of an old school Death Metal fan of bands such as Deicide, Sepultura, Mayhem and Bursem, I decided to say, yes I’d love to go, although I was apprehensive as to what I was letting myself in for.

Entering the Venue, merch stalls circled the inner entrance and bar area. I was greeted at the door, entrance being fast and friendly. We headed straight for the bar, where we were served and headed into the room out the back where we could hear people had already gathered. 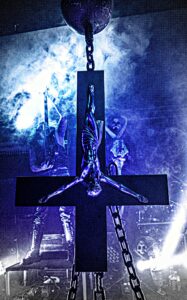 Dark and very smokey, the stage lit up, smoke was thick and red lights shone through. Taking a while to clear, here we waited anxiously for BELPHEGOR. The stage was decorated with massive amplifiers, inverted wooden crusifixes, skeletons and various stands and pots around the place. One of which was promptly lit on fire with what appeared to be a burning Bone… The room filled with a sweet incense smell as the pot bellowed out smoke into the air. The atmosphere is set as the band hit the stage Dark, Loud and Brutal in true death metal style. Singer and guitarist Helmuth Lehner with a face covered in blood splatter roared into the microphone commanding the attention of the room. They effortlessly played through the first song, announcing to an expectant and appreciative crowd that they had in fact arrived. The atmosphere from the crowd was felt as literally everyone cheered. As 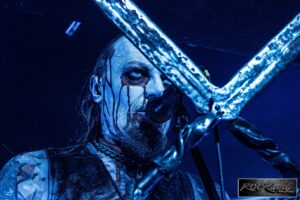 BELPHEGOR played on not missing a beat performing exceptionally well. I knew at this point I was going to be a new fan.  As the night went on they played track after track of Bloodied Dark music to a responsive and pleased crowd.  A mosh broke out during the song ‘Conjuring The Dead‘ as the drummer blasted away, you could feel every kick drum pounding through you, it was difficult not to react as the room went wild pushing and shoving, a pit opened up and the room turned into a headbanging frenzy. Then chilled and calm as the song slowed down. Nobody was hurt, no bad feelings only people with a common love of Metal at it’s finest having a good time.  Song after song of atmospheric  music, that really could only be described as haunting and heavy. Everybody’s head banged punching fists in the air responding to every command. The band gave a whole bunch of guitar picks and sticks to the eagerly grabbing front row. The fans really love this band, and it’s clear this is reciprocated tenfold by the band. Even I myself got a prize.. A BELPHAGOR guitar pick to add to my collection. The set finished abruptly with frontman Helmuth making a cut throat gesture with his hand and the band all turned and left the stage. I guess time was up because even the chanting of “One More Song” the magic words in Metal to bring a band back to the stage did not work. I guess BELPHAGOR‘s dark magic was stronger than this age old chants power to draw musicians back to perform.

I would definitely go and see this band again, Brutal Music, amazing stage show, presence and effects for the hardcore metal fan.  Thanks for a great night guys you’ve a new fan.

Official video (censored) for BAPHOMET off their album ‘TOTENRITUAL.’ 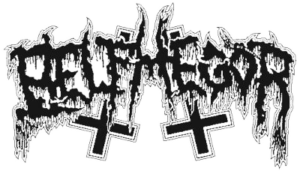 GINGER WILDHEART & THE SINNERS plus Support – 229 The Venue, London, UK

17th of December, was the date we travelled to a very special show at 229 The Venue,  New Portland Street in the heart of...
Read more

It's that time of year again and what we all need is a fine sludge and death metal concert to get us in the...
Read more

It’s been too long since the real aura of rock filled the Birmingham air, the raunchy guitars , possessive drum beats and the smell...
Read more

PAPA ROACH is kicking off the new year with a powerful message behind their latest anthemic single ‘Stand Up’ "It’s inspired by the social...
Read more

PAPA ROACH is kicking off the new year with a powerful message behind their latest anthemic single ‘Stand Up’ "It’s inspired by the social...
Read more

ROCKwell UnScene Takes A Dip Into The World of Psychedelic Rock...