Birmingham UK is not a place I venture to often for a gig but this one line up did make the trip worthwhile. The O2 institute as a venue is very nice with some good viewing points and 2 bars, which would have been fantastic had I not been driving and the prices weren’t so high.  Also I will mention  I had been to the Manchester show as well as this one, so I knew what was coming in terms of the bands. 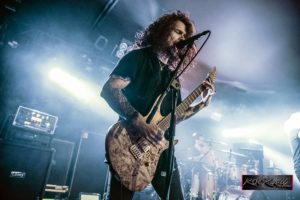 First up was Danish bruisers Cabal, this being their first UK visit probably meant they didn’t quite know what to expect in terms of a crowd reaction but once ‘Bitter Friend’ kicked in, so did the crowd. Pits began to erupt and then continued for the rest of their performance all being ‘push pits’ here rather than Manchester’s hardcore dancing. Cabal were machines on stage playing each song note for note perfect and matching vocally as well. While their album consists of many guests throughout and some bands would have opted to have these pre-recorded and played as a sample, Cabal opted for, in my opinion, the better option of performing them live. This for me works better than on the album as I really enjoy the mix of styles utilised by both the guitarist and front man, there were certainly hints of both Thy Art is Murder and Born of Osiris in their delivery. Cabal’s sound in itself feels fresh compared to many other bands of this genre, it’s almost like they have taken some Scandinavian influence in terms of the guitar playing to add a hint of melody under the immense brutality as well as bringing some samples/back tracks. These were not too much that they end up taking away from their overall sound but added enough to give their songs a little more texture. Cabal stunned me, both here and in Manchester. Engaging with the crowd, including a cheeky bit of crowd surfing from the front man as well as grinning from ear to ear throughout the entire set. This set was an absolute sledgehammer to the crowd to begin the evening and I can’t think of the last time I saw an opening band that I enjoyed this much. 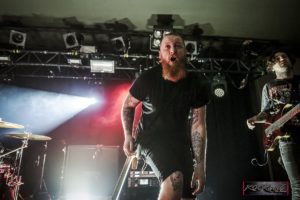 Distant have been carving a name around the Europe as being one of the heaviest bands going and tonight’s performance was no exception. They pick up exactly where Cabal left off with pure brutality and immediately the crowd respond with yet more pits and even crowd surfers. Again Distant are another band which play with absolute precision tonight, each note and each beat absolutely on point. Treading the fine line between Slam and Deathcore beautifully, their breakdowns are ungodly heavy and I’m pretty sure the bass drops can be heard from London. Mixing with some faster paced beats throughout giving the crowd chance to pit between snapping their necks, it just all fitted together perfectly. Vocally, his range is insane! From screeching highs to gut wrenching lows, they are all delivered perfectly and that’s before I mention the pig squeals, these are on another level of evil! The fact that he was able to switch between each style so cleanly was a sight to behold and members of the audience can be seen pulling the typical ‘filthy face’ when he does so. Distant also own this stage, most notably the bassist who towers over the crowd glaring at whoever is nearest, he is just imposing on stage. Again some backing tracks are used here but sparingly, mainly for intros or under a breakdown to add an eerie low rumble to the heaviness. Distant performed a belter of a set and in my eyes could not have done anything better, I love these guys on recording and it translated perfectly live. 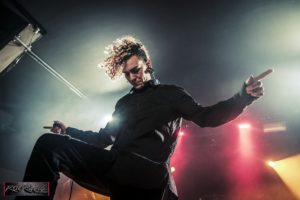 Lorna Shore went viral last year after the release of ‘To the Hellfire’ and a certain vocal ending. This song really did take the metal world by storm with many trying to imitate this, myself included. The real question after the release was, could he do this live? Thankfully the audience didn’t have to wait long to find out as ‘To the Hellfire’ was the opening track of the evening and it did not disappoint, the ending was absolutely spot on and had the whole crowd in awe as many phones rose up to capture this moment. From this they continued into the rest of the EP performing each song as if it were pre-recorded, the orchestral arrangements thrust way forward in their sound giving a very dark and grand feel to each song. While sometimes it felt like the backing tracks were a bit over used, I can’t help but marvel in the atmosphere they produce. Throughout their performance the drums are machine gun esk, unrelenting speed and the guitar solos cutting through like a hot knife through butter, they were spine-tinglingly incredible. Lorna Shore proceeds to play a few songs from their discography but this felt like a bit of a lull in the set seeing as they started so strong. This was noticeable in the pit also as where there was once a constant circle and bodies being hurled around, were now static. However, this all changed when the set drew to a close with ‘Fvneral Moon.’ This instantly whipped the crowd back into action and thus scream for encore. This was met with the simply brilliant ‘Immortal’ which for me was one of the highlights of their set, the monster of a breakdown to close what was on the whole a truly fantastic set and really has marked Lorna Shore as one of the heavy weights within the Deathcore scene.

This whole evening was incredible and felt like the beginning of overseas bands coming back to the UK. This has been something so many people have missed and with the amount of bands using the ‘off time’ to write new material, we are all in for a treat over the next year!