GINGER WILDHEART & THE SINNERS plus Support – 229 The Venue, London, UK

17th of December, was the date we travelled to a very special show at 229 The Venue,  New Portland Street in the heart of London UK. Ooh free parking a few minutes away from the venue- we made our way through the cold and damp back streets to our destination. Met by a group of dedicated die hard followers of Ginger Wildheart, others were curious and looking forward to see how the Sinners faired to the Wildhearts.  A quick free and smooth flowing line with Lateral Flow Charts negative results and proof of vaccinations checked by security and we we’re in.

First on stage was Nick Parker, from Glastonbury– a solo artist with acoustic guitar in hand.  Great interaction with a somewhat scarce crowd, and doing his best to loosen up the onlookers – With his own brand of humour in the songs, I felt he did just that….

Soon after their album launch show at The Black Heart in Camden, Ragany and the Digressions were up next as main support. Their album, ‘Beyond Nostalgia & Heartache’ was well received by fans and critics alike.

Ragany often appears on stage with an element of surprise in his eyes, almost shocked that people want to listen to his music and watch his band perform.  As always, they turned in a performance but that all changed towards the end of heir performance…. It seemed like they had been challenged to step up their game, becoming heavier, louder and more intense with the caged animal bursting out. If there were people present who didn’t like acoustic set, then I’m sure some were converted by the end of the band’s set. I certainly was…

With some two albums worth of material written and recorded, yet nothing available to an eager, needy public, the only way to hear new music from Ginger Wildheart (outside of The Wildhearts) is to go and see the band perform live.

What worked and something Ginger has often wanted in a band, is that Neil is both guitarist and lead singer. The role freed Ginger up to indulge in playing, harmonising and yes still playing the role of lead vocalist but not all of the time. Whilst he openly admitted on stage the lead vocalist position is one that he’s accepted over the years, it was clear to see he was enjoying the elements as Neil stepped up with thanks, banter and the odd story to enthral the crowd.

The musical style was a mixture of southern rock, country, classic rock with a few hard rock numbers thrown into the mix. With a Georgia Satellites cover slotting neatly against Ginger’s own material and the Stone Mountain Sinners ‘Arms of Love’ (which got a great sing along going), what was one of the most intimate Birthday Bashes (in all but name) was also one of the most enjoyable. For over an hour, we were able to forget what was happening in the world and get lost in a myriad of tunes that were both familiar, new and exciting in equal measure.

The smile Ginger had when introducing new material he’d written with the band said a lot. Clearly inspired and enjoying working with the other three, the music we’ve got to look forward to in (hopefully) Spring 2022 will be well worth the wait.

The highlight for the four-piece came from a mutual love of Status Quo and a fan friendly rendition of ‘Dirty Water’. Smiles all round, note perfect and a great moment to be part of for the crowd.

No Birthday Bash (it was… let it go

) is ever complete without a few special guests. The few this year came in the form of both Andy Brook and Kit Swing from Rich Ragany’s band with Kit performing guest vocals on a cover of ‘Honour’ which Ginger had originally recorded with Courtney Love.

The Wildhearts ‘Only Love’ from the vastly underrated ‘Must Be Destroyed’ album followed and the set closed with ‘Loveshit’ which strangely felt like the most accurate way to finish live shows in 2021. That the gig happened at all was a miracle with so many other acts falling by the side, but thanks to the tenacity of the performers, the venue and the fans that were willing to put their faith in the hands of strangers, it all turned out well.

Let’s do it all again next year!

Ginger Wildheart & The Sinners
1 of 9 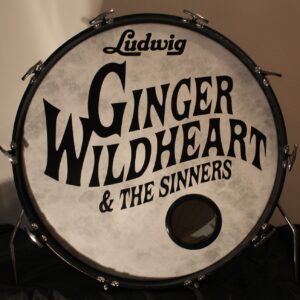 Breaking Bands launched as a festival in 2015, it became an established festival quickly, and sells out year on year. This festival is not...
Read more
Previous articleBEHEMOTH Share Final Live Video From “In Absentia Dei,” Out NOW
Next articleGHØSTKID Announces February UK Tour Dates Plus Exclusive Live Stream With Any Given Day.

Just under a week till the gates open to the Danish music mecca of COPENHELL... https://youtu.be/LA1_vJKy_ao AND THE FULL LINEUP IS HERE... WEDNESDAY 15TH JUNE.... THURSDAY 16TH JUNE FRIDAY 17TH...
Read more

DECAPITATED | 1st April 2022 Show Review, With Support From Where...