After many postponements this tour finally rolls around with a sell-out show, this has been eagerly anticipated. While the Bread Shed may not be the largest venue in Manchester it just about manages to hold a hyped crowd for this show,  even if there ended up being a queue for the male toilets being first for me at this venue.

Throughout the tour DECAPITATED have been adding a local support, which I find as a nice touch as it gives a ‘smaller’ band a chance to play with larger touring bands. Manchester’s offering was Where Oceans Burn, a band I have seen multiple times and very much enjoy. Their sound maybe a little on the soft side compared to others on the bill, this doesn’t deter these guys from throwing all their energy on stage. As usual the guitarist can be seen spinning around and bouncing all over the stage with the few early punters reacting well to this by also spinning around fighting the invisible ninja’s. I have to mention Where Oceans Burn line up excludes a bassist, this is sometimes very apparent to the  distinct lack of low end to their songs which in some parts is rectified by huge bass drops heavy enough to tear apart the earth’s matter. Where Oceans Burn boast some fantastic clean singing which tonight cut through the mix like a warm knife through butter, and frankly sends shivers down your spine! Ending with 3 absolute bangers ‘The Only Home We Know,’ ‘Shadow//Self’ and ‘Hollow Heart’ just about sum up this well constructed set, beautiful vocals, heavy hitting breakdowns, stunning harmonies and choruses catchy enough to end up stuck in your head for the next 3 weeks.

Next up another band I have seen before were Londoners Harbinger, a band previously rated as one of my favourite performances of 2021. This time their lineup had changed slightly with a new vocalist who added a fantastic mix of vocal styles from shouting, growling and even parts of singing. The singing was barely audible during their set sadly; whether there was a lack of power or a sound issue I am not sure. Other styles were certainly incredible their delivery was flawless! In terms of the rest of the band, filling the stage. Climbing on monitors, jumping into the crowd and generally acting like they had drunk 3 or 4 Red bull’s before hitting the stage. Musically there is such a variety of styles here, it’s like they have thrown every subgenre of metal at the drawing board to see what fits. In a really strange way it all fit beautifully, the mix of thrash, deathcore and even elements of doom all seem to have their place within their set and it just worked tremendously. As I have stated I have seen Harbinger before and as soon as ‘Descendants’ kicked in, I remembered the exact point a few of my ribs decided to split and that for me is what Harbinger are; aggressive, fast and heavy. This is exactly why the crowd exploded for these guys where pits were constant. Was this as good as when I saw them last year? It’s too close to call.

Signs of the Swarm are a band I hadn’t actually listened to until I found out I was going to this gig and boy was I in for a treat! After seeing Lorna Shore last month I was still very much in the mood for disgustingly heavy deathcore. That is exactly what I got with Signs of the Swarm. 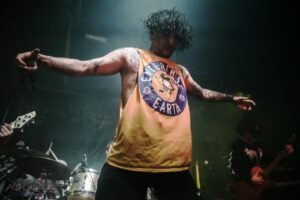 My face was constantly pulling the usual ‘disgusting breakdown face’ throughout their set and throw this with some animalistic vocals, I was in my element. I was completely in awe of the range this guy has, the highs are just pure filth and the lows reminded me of a pig letting out its final breath (this is a good thing). Throughout the set these guys were constantly in the crowds face pumping them up although I think if I had played a drinking game for the number of times they shouted ‘Manchester’ I would have been completely wasted by song 3. The crowd were in the palm of their hands; Asking for a pit, they got one, wall of death? No problem, crowd surfing? Okay now it feels like I’m at Bondi Beach! The sea of people being carried over the barriers seemed to completely overwhelm security, so much so the singer from Harbinger leant a hand catching the flow of bodies over the barriers. Signs of the Swarm had a reputation for bringing absolute carnage, tonight was no exemption. This was a simply brilliant set which seemed to tick all the boxes, ending with ‘Cesspool of Ignorance,’ beautiful!

With 25 years of technical death metal under their belt, this was always going to be a bit of an occasion. Decapitated have always been one of the leaders in their genre and there is a reason why, despite the age of the band itself, they still manage to pull off the old school death metal sound while mixing the new age beats, they have been doing this for two and a half decades. Beginning with a brand new song ‘Cancer Culture‘ which was met with a fantastic reception from the crowd, as pits already erupt and grow with each song that followed. Decapitated roll through songs from their back catalogue from the insanely heavy ‘Carnival is Forever’ which I’m pretty sure most of the crowds necks will be feeling the next day. To old school ‘Nihility.’ Each song is tight as those shoelaces you tied up while drunk and now cannot undo. The only blip in their set was the vocals kept cutting out, but this was a minor setback to what was utter brilliance. Normally I have a joke with local bands to get either a bass or a drum solo, with Decapitated I was happy I didn’t feel the need to heckle as once ‘Day 69’ kicked in I knew what was coming and the solo was performed perfectly. 25 years is an awful long time to be producing music of this genre, but even now Decapitated made it look effortless and were rewarded with a sell out show, pits taking up the entirety of the floor space and the odd crowd surfer (not quite Bondi this time). It was a truly impressive set and when ‘Spheres of Madness’ kicked in my neck also packed in. An absolutely brilliant set from one of the pioneers of this genre!