Once upon a time, in a galaxy, far, far away….
Oh, wait, that’s a different storyline… 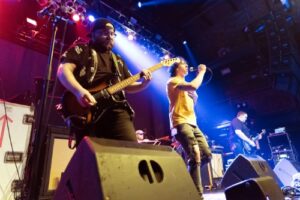 Starting the night out was the Minneapolis, MN (USA) based band Divide the Fall, bringing their metalcore and post hardcore influence too the stage. They are high energy, even when singing about dark places in life. Next up was the Canadian progressive metal band, ONI. Forming 7 years ago their bio lists only one member, Jake Oni. But having been there, I can tell you this not a one man band. It is an experienced outfit that has many producing/contributing/writing with other metal outfits like Lamb of God. Bringing a strong powerful performance to the stage and were well received by the crowd. 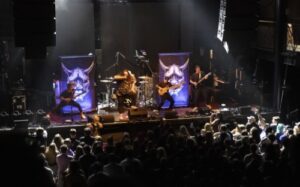 Okay, let’s see, what would you book as the next band on a bill that has thus far brought metalcore and progressive metal to the stage, so far? I’m willing to bet you probably wouldn’t go to the country music capital of the world, Nashville, TN (USA) and find a Christian alternative/rock band for the next performer. But that is exactly what they did. Enter RED. Formed in 2002 by brothers Anthony and Randy Armstrong along with lead singer Michael Barnes. Being joined by Brian Medeiros on drums, who also is no stranger to the music scene, with over 20 years of experience behind the kit. Bring a positive message to the stage in a well-executed hard rock format that will have you searching for them to listen to them again. Their 8 song setlist included:
*Feed the Machine 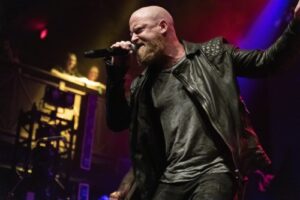 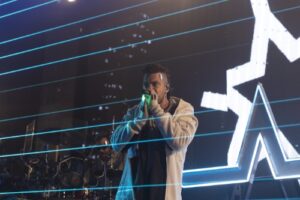 Okay, now where do they go next with this bill? Space, the final frontier? A galaxy far, far away? Well, in a way, yes. Enter Starset. Starset is the brainchild of one Dustin Bates. But, Dustin is not your average musician, and therefore, Starset is not your average band. Mr Bates formed the band in 2013. Earning a master’s degree in Electrical Engineering, did research for the U.S. Air Force and taught at the International Space University. So, I suppose that makes a good foundation for a rock and roll band. Oh, this can’t be any band, it needs a backstory. So, you create a fictional society and call it the Starset Society. Its purpose is to warn the public about a “message” received from a mysterious signal from space. While a totally fictional backstory, it is always related to as reality in interviews, and songwriting. Okay, this is a little beyond your typical “get some friends together, smoke a couple doobies and start a band in the garage.” This was premeditated. With that much effort into planning, they set the expectation high for their show. This was not my first time seeing them, but past shows had all been outdoor festivals (in daylight). I had heard about the bands arena shows being a spectacle to experience. While their music is classified quite often as electronic rock, alternative rock, they like to refer to it as cinematic rock, as in this is like the soundtrack to a movie. This self proclaimed style is not far from the truth. 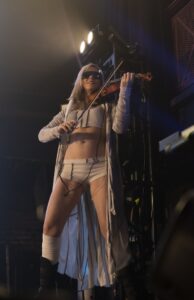 Okay, to recap, we have an overachieving engineer who decided to form a band and make up a cool storyline to create the foundation of a story….
Okay, now what would you expect the sound to be? With that story, it wouldn’t be a reach to think of the sound being a Kraftwork, or Gary Numan or even Devo electronic sound from synthesizers and drum beats. They have all of that, but they threw in well played guitars, bass, violin and a cello. You read that right, a cello. And, with an electrical engineer at the helm, there has to be cool effects to go along with an interesting storyline and a group of very talented musicians. Interesting lighting, fog, simulated smoke and lasers are accompaniments to some very camera worthy musicians. Starting off their show with Carnivore off their first album Transgression. They are a cinematic stage show with catchy tunes that command radio airplay, but you can listen to them and still be regarded as cool. These guys really do hit on all fronts live. There is good music, a good stage show, and at the end of it all, leaving you wanting more. With a few festival dates in the US through September, and land (pun intended) in the UK in February 2023 to kick of their European/Asian tour. You really don’t want to be the one who didn’t go and have to listen to all the admonishment of “you missed a really good show.”