Thundermother returns to the music world once again with their fifth album that is guaranteed to literally take the world by storm.

Now anyone that knows anything about the band Thundermother knows they have more than earned their name and place alongside other great female figures in the Rock & Roll scene. With this fully female band having enough raw rock & roll energy to literally shake the heavens and an explosive name to match, this band is perhaps one of Modern Rock’s most formidable forms of female empowerment; something that is perhaps even more important now, as the genre is finally moving away from its male dominated appearance and starting to recognise the great female figures behind the scene. .

Each of their four previous albums and sixteen singles/EP’s has been an incredible display of classic rock & roll talent with all the elements you would want to hear, from wild and eccentric guitar and drums, to raw and explosive vocals giving each song just the right amount of edge. This band is also no stranger to success regarding live shows and performances, having held concerts in many locations around europe and performing at Copenhell in 2022 in Denmark; an event which is being followed by touring alongside SCORPIONS and WHITESNAKE on The North American Rock Believer 2022.

With all of these tours lined up, it appears Thundermother’s new album ‘Black And Gold’ could not have come at a better time. If fans aren’t eager enough already, they are sure to be scrambling to purchase tickets in the hopes of hearing these new songs live.

Like their other albums, ‘Black And Gold’ is a fantastic example of pure rock & roll talent with all of the classic elements you could want. The ladies of Thundermother truly went all out with these tracks, meaning each is so identifiably different and yet so unmistakably rock & roll to the core. The opening track ‘The Light In The Sky‘ is constructed much like a protest chant or a classic anthem, opening with heavy and raspy lyrics over minimal instruments that gradually increase as the chorus approaches. Following this, tracks Black And Gold and Raise Our Hands have a much faster rhythm that applies both the lyrics and instrumentals in equal measure. ‘Hot Mess’ (one of the two tracks released early alongside ‘I Don’t Know You’), on the other hand, is structured very differently; having instead taken the form of a rock ballad rather than an anthem. Alongside this is the track ‘Borrowed Time’, which also provides fans with a rock power ballad by combining mournful but smooth lyrics to a gentle drum and bass allowing electric guitar to stand out the most.

The remaining album tracks all seemingly follow the classic rock & roll style when it comes to structure, lyrics, and instruments; but despite this they are all able to provide something different with each song. Tracks ‘Stratosphere’, and ‘Loud And Free’ are certainly not afraid to live up to their names regarding their rhythm, as they are set to electrifying tempos accompanied with heavy instrumentals and raw, unhinged lyrics. Other tracks, such as ‘I Don’t Know You’ and ‘Looks No Hooks’ are certainly steadier in their tempo, but also demonstrate the bands incredible vocal range and provide audiences with a nostalgic feel as each song carries that simple but definitive rock & roll style that Thundermother does so well.

If you’re searching for the nostalgic feel of rock & roll greatness, then Thundermother’s ‘Black And Gold’ is the one for you. Whether you want the raw energy of an anthem, the emotions of a ballad, or you just want to see your favourite genre continue on with a band that has all of the passion to make their work great, then I highly recommend you let these ladies show you how it’s done. It was Sister Rosetta Tharpe founded the rock & roll genre, and now its bands like Thundermother that are truly carrying on her legacy. 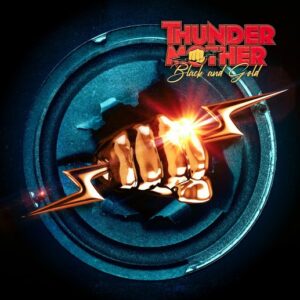 Hatebreed, fresh off a tour with Black Label Society, and an appearance at a US festival, it was time for their headlining tour. This...
Read more
Previous articleSPIRITBOX | Release Brand New 3-Track Single And Official Music Video For Title Track ‘Rotoscope.’
Next articleBLOODSTOCK Festival (UK) | Goes Pink For Sylvia Lancaster OBE And Reveals More Jagermeister Stage Bands.

THE PRETTY RECKLESS | Album Review ‘Other Worlds’ Out Via Century Records 4th November 2022,

Rising from the graves of Rock 'n' Roll, The Pretty Reckless return with their new album 'Other Worlds' to bring us a blast from the...
Read more

AMONGST LIARS | Self Titled Debut Album Set To Drop ‘This Friday’ 8th July.

Formed the end of 2019, Amongst Liars are a 4 piece from Eastbourne/Brighton. Releasing their first single 'Over & Over' in February 2020, at...
Read more