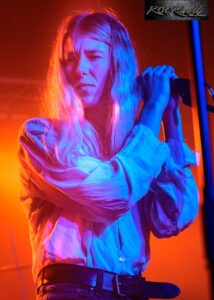 Samana are a duo from the Welsh valleys who explore an array of musical styles whilst maintaining a tranquil essence at the core of all their work. To limit them to music would be doing a disservice as its evident from the website Rebecca Rose Harris and Franklin Mockett’s artistic journey incorporates other avenues including intriguing photography. Tonight, Samana are unleashing tracks from their new album ‘All One Breath‘ beginning with an alt-folk number called ‘Glory Of Love.’ Slide guitar beautifully complements the alto vocals which remind me of Johnette Napolitano from Concrete Blonde with the rich lower register surging up to reach the higher notes. ‘Harvest‘ sees a move into a more up tempo number, as the finger picking guitar contrasts with Rebecca’s swooping voice which she uses more as an instrument than for the lyrics as the song crescendos to its finale. 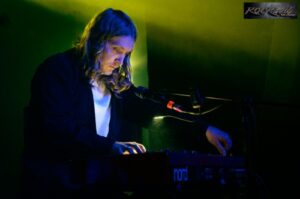 Samana effectively use delay and reverb with both instrumentation and vocals to produce a dreamy wave of sound that allows the listener to drift to alternative landscapes. The final song, ‘Live For The Road,’ captures the ambience of driving along an open deserted road through middle America with a sense of freedom. Having experienced Samana’s live performance and now their recorded work, I can truly appreciate why Guy Garvey is championing them; fingers crossed we see them at the Moseley Folk Festival this year. 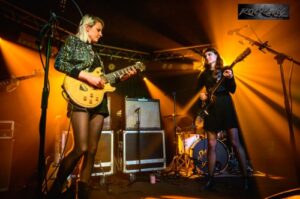 Smoke Fairies are another superb duo who should be on the line up for the Folk Festival as their musical take on the genre is both inspiring and gripping. Katherine Blamire and Jessica Davies have been writing and performing music together since the early 2000’s. Their connection musically as friends is clear from their onstage presence. The two often turn to face each other particularly at the start of songs and then between tracks, as they are tuning up, an array of topics are humorously discussed including cats and spilling whiskey during their last show in Birmingham. The pair have a self-deprecating vibe about them which is endearing especially as the music they’re producing is so emotive and uniquely beautiful. Tonight’s set consists of a number of songs from their latest album ‘Darkness Brings the Wonders Home,’ starting with the final track ‘Super Tremolo.’ 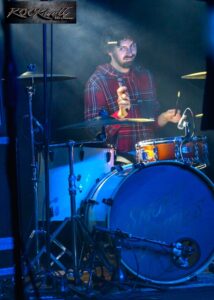 Smoke Fairies have the ability to create songs that demonstrate the vocal harmonies at their finest with guitar parts that weave exquisitely to produce heavily but delicate pieces. The lyrical content explores human interactions from a different perspective as shown with ‘Don’t You Want To Spiral Out Of Control?’ making the songs even more intriguing as the innocence of the vocals contrast to the edginess of the words. Davies and Balmire are joined onstage by local musician John J Presley on bass and Sean Fallowfield on drums, both of which enhance the set with their musicality and appreciation of the dynamics that are produced by Smoke Fairies recordings. 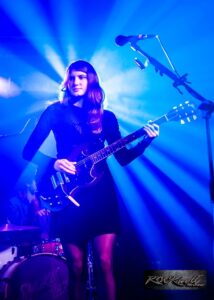 The band have an ability to flit between heavier tracks such as ‘Disconnect’ and ‘Elevator,’ with its gritty opening guitar riff, then a more traditional folk number such as ‘Summer Fades’ with its ethereal and sparse first verse, yet, the duo manage not to lose their musical identity. An hour long set, spanning their recording career is not enough, the repetitive chorus of ‘Eclipse Them All’ reminds me of ‘Blood Speaks‘ and before you know it, I’m wishing the band would stay on the stage for a further 2 hours. However, they finish the initial part of the performance with the driving force ‘The Three Of Us’, with its tremendous slide guitar riff and pounding drums and haunting chorus, utterly joyous. The encore takes a turn as Blamire and Davies return without the band to play ‘When You Grow Old’ and bluegrass inspired ‘River Song,’ a tender piece that generates soundscapes of water movement and the superb lyrics ‘You Make Me Woman.’ As they leave the stage, the audience are truly appreciative of the outstanding evening of music they have been treated to. 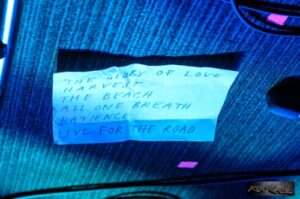 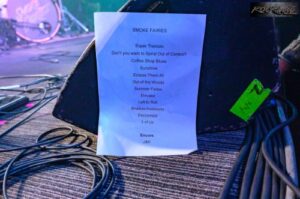 On Wednesday 18th May 2022, This is the day TMRW and Kaleidoscope brought FRANKIE AND THE WITCH FINGERS to Birmingham’s Hare and Hounds (UK). Opening...
Read more
Previous articleDAGOBA | Album Review ‘By Night’ Out 18 February 2022 Via Napalm Records.
Next articleVOLCANOVA | Album Review ‘Cosmic Bullshit’ Out 25 February 2022 via The Sign Records

Okay before we go any further, it is always a challenge to try to figure out who is going to get booked to open...
Read more