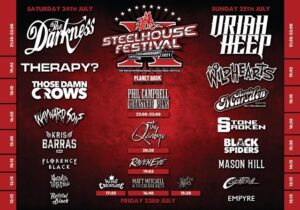 With a reduced capacity, to comply with government requirements, it was a very emotional reunion with hugs, tears and fist bumps. As we embarked on a new journey after a very difficult 18 months of lockdown, there was nothing to stop us all meeting up with old friends and new, singing, dancing and most of all, listening to what we’ve missed most- LIVE MUSIC. 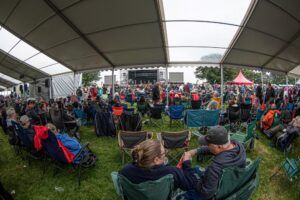 This was the first time ROCKwell Unscene Magazine have covered this festival, so we didn’t expect the rocky dirt track to Hafod-y-Dafal farm and boy was it a challenge. Nothing that Kwik Fit can’t resolve. But the off road trek was worth well it, the views from the top of the mountain are stunning.

Press passes and wrist bands on, lateral flow test results checked and reviewed we were finally at the STEELHOUSE mecca of rock.

After walking past campers dragging tents in makeshift trolleys and the ever so slightly posher glamping area, we made our way to the gates.

Crowds were gathering and the countdown had started. 10-9-8…..3-2-1 and the gates were open for the 10th Anniversary of STEELHOUSE FESTIVAL. the weather was glorious, the atmosphere was one of excitement and anticipation with thousands of very smiley people.

Whilst the lineup for this momentous occasion was fantastic, at this point it fell by the way to almost incidental, this moment was excitement, we were doing something, gathering together, thing we almost took for granted before the pandemic.

FRIDAY – Howling Tides opened the show, this 4 piece band with their blazing brand of classic rock soon had the craving crowd behind them. This set will live long in the memories of every ‘Steel Houser‘ for kicking off the 2021 festival.

FRIDAY - Howling Tides opened the show, this 4 piece band with their blazing brand of classic r...
1 of 4

Matt Mitchell backed by the Cold Hearts followed and maintained the excited crowds energy. Matt has been on the scene for a while now with stints with Colour of noise, Pride and Furyon. His band played like their lived depended on it, much to the sheer joy of the cheering, dancing crowd.

Cornwall’s 4 piece King Creature powered their way though another set that impressed all. Led by Dave Kellaway you cant help but think this band are on the verge of big things with a large number of the crown sporting King Creature T-shirts.

Raveneye who have previously toured with KISS in Europe guided the crowd through a pleasing number of songs from their ‘Nova‘ album with their blues influenced hard rock. good to see Oli Brown and his trusty comrades doing what they do best.

The Quireboys headlined the first night, Spike and the boys previous visitors to the mountain in 2018 really started the party with swagger and a sense of humour. As the sun came down over the farm the crowd sang and danced to a blistering set, including such classics as  ‘There She Goes Again,’ ‘Hey You‘ and ‘Sweet Mary Ann.

‘Phil Campbell and The Bastard Sons: The Motorhead guitarist delivered a headline hour long set kicking off with ‘We’re The Bastards.’ A few weeks before the festival the band announced the departure of vocalist Neil Starr. A few days before the festival Andrew Hunt (formerly of Buffalo Summer was revealed as their temporary vocalist, who soon dampened any fears with his superb vocals. The 14 track set which included ‘Going to Brazil,’ ‘Killed by Death‘ and ‘Born to Raise Hell‘ delivered in jubilant style. The perfect headline act, as 11 o’clock approached, beers in hands the crowd beamed. What a fantastic first day.

SATURDAY – An expected overnight storm arrived in the early hours and had taken down a few tents and gazebos on the campsite including Stage damage. The hours delay to the proceedings did nothing to dampen spirits.

Revival Black ensured the weather woes were quickly forgotten causing the crowd to take part in some early dancing and singing. Lead singer Danny Byrne the lead spent most of the set at the end of the stages walk way, engaging the crowd, an excellent start to the 2nd day.

Hands Off Gretel were up next delivering some glamour/punk influenced hard rock with accompanying sassy political lyrics which did change the mood a little, but the crowd still had a great time.

Florence Black, the Methyr based trio certainly gave the festival a new spin. Tristian Thomas can appear a little static with his simultaneous guitar playing and vocals, however he made good use of the walkway. Padge from Bullet for my Valentine guesting on their cover of Budgies ‘Breadfan‘ got the mountain singing.

Kris Barras and his band were making their debut at the mountain and whilst impressed with their talent the set was one for watching from further back and getting a much needed fuel top up from one of the many catering offerings.

The Black Spiders sadly suffered a ‘pandemic Covid ping’ so it was left to Planet Rock presenter Toby Jepson to step in as a last minute Hero with an acoustic set.

Those Damn Crows This band is a definite future headliner. Their unique style of classic rock is played with finesse. Greenhall is an excellent, humble front man. A blend of hard-hitting rock tunes mixed with softer ballads worked well, with them delivering a rip roaring finale.

Therapy? Produced a powerful set sprinkled with a dash of Judas Priest nearing the end. Northern Ireland has produced some good bands over the years, but few generate the adulation of this band with a die hard fanbase singing every word.

The Darkness Replacing Anthrax who due to travel logistics unfortunately had to withdraw. The band fronted by Justin Hawkins are no strangers to STEELHOUSE having headlined in 2016, however this time round something just wasn’t working, strange song choices, everything a little flat with many of the crowd heading back to their tents early, a disappointing end to what had been second good second day.

SUNDAY – Collaterol The 6 piece Kent based band fronted by Angelo Tristan delivered a full set showing masses of swagger and style. Tristan bounced and flounced on stage wearing a flamboyant full length coat he tried to remove after the first song, got his arms stuck in the sleeves and had to be helped by a crew member much to his and the crowds amusement. Releasing their debut album last year they delivered a very polished set, this band will do very well.

Mason Hill A lot of support for these Glaswegians. Formed in 2013 they delivered their infectious brand of hard rock. Frontman Scott Taylor beaming from ear to ear soon having fists pumping and heads nodding. Mason Hill had travelled the furthest to the mountain, but I’m sure reaction from the crowd was enough to recharge that long journey home.

Wayward Sons were pushed into Black Spiders slot Fronted by Jepson, they received a huge ovation. Already three albums in their through their four year career, with Jepson able to write a classic rock track as if by magic. ‘Any Other Way‘ and ‘Until the end‘ going down a storm.

Stone Broken Definately a band to watch. Their driving rock is enjoyable and uplifting. Rich Moss being a humble down to earth front man. A familiar sound but delivered in their own distinct style.

Empyre Their music is dark, technical but melow. ‘Only Way Out‘ being a stand out track. Nice to see them appreciated by the crowd.

Bernie Marsden and Nev Macdonald – Lengendary guitarist Marsden whose set is usually picked from a Whitesnake catalogue. Macdonald is a previous hero of the mountain having appeared with his band Hand of Dimes and Skin. A set full of nostalgia and emotion McDonald was more than stunning with his superb vocals . A crowd reaction like no other everyone singing along to ‘Here I go Again,’ ‘Fool For Your loving’ and ‘In the Heart of the City.’ As the sun started to lower in the sky speckling it’s last light across the arena it was time for reflection…..a true goose pimple moment. No other band over the weekend received such a reaction and ovation.

The Wild Hearts Simply blew the stage to pieces. Ginger, Ritch, CJ and Danny blasted their way through an hour of new and classic tracks in robust style. The crowd clearly in the mood, the mosh pits briefly opened. A band not to be missed.

Uriah Heap Celebrating their 51st anniversary took us for a trip down memory lane with a 90 minute set that was truly captivating. Bernie Shaw delivering fantastic vocals, Mick Box, one of the most underrated rock guitarists and Phil Lanzon on keyboard and vocals. Now entering their fourth decade this band deliver a spell binding performance demonstrating why they’re one of the longest performing rock bands, sheer class. A set crammed with classics, as the band completed by drummer Russell Gilbrook and bassist Dave rimmer proved to be undeniably worthy headliners.

Fireworks closed the festival in style, then a walk back to camp…

For the last 3 days the world seemed almost normal. Will we be back next year? To drive up that rocky hill to the festival on a mountain top?

Steelhouse was a pleasure, with the friendliest people and will be known as the small festival with a big heart…

Hatebreed, fresh off a tour with Black Label Society, and an appearance at a US festival, it was time for their headlining tour. This...
Read more
Previous articleFOO FIGHTERS | Announce 4 UK Stadium Shows For 2022.
Next articleJINJER Releases Astonishing Title Track ‘Wallflower’ + Music Video

Free from the clutches of Covid 19, Tuk Smith & The Restless Hearts have arrived returning to the world of Rock 'n' Roll with...
Read more