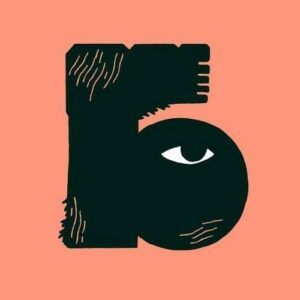 Having spent far too long watching late night live streams to get that music fix, there’s  nothing like seeing gigs in the flesh, a long 16 months have passed by and this weekend Ragley Hall, Warwickshire in the UK was hot on the ball to be one of the first festivals as the pandemic eases boasting headline sets from Primal Scream, DJ Yoda and Hot Chip over the course of the weekend.

The staff welcomed campers young and old onto the field on a wet and windy weekend, mud skidding across the field on Friday night as the rain had cascaded down, but that didn’t stop beaming smiles eager for live music and great beers with over 15 different beer stalls to choose from , lights flashed, speakers boomed and the quiet rural village was booming with life as the lucky 4,000 filled the field.

Property of ROCKwell UnScene
1 of 13

Determined not to let the rain damper their spirits, the odd bit of vodka won’t matter surely DJ Yoda delivered a strobe infested headline set backed with Stranger Things graphics to keep the crowd warmed up, rocking the stage with mixes from Warren G and Nate Dogg to the sounds of Dolly Parton, no genre was left unturned for the iconic DJ.

With the sun battling the rain , all hangovers were cast aside for Saturday`s shenanigans. The heroin chic vibe engulfed the main stage as Lias Saudi prowled the stage with his presence, swigging out of a bottle he glared at the crowd as they cheered Fat White 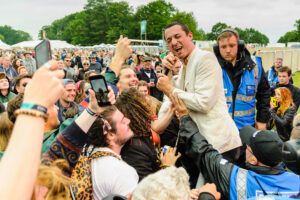 Family returning to the festival scene. The hipsters going wild as the rock n roll antics unravelling in front of their eyes. The heavy guitars and seedy synth sirens the epitome of covid rock. It wasn’t long before the hypnotic tones of “I am Mark E smith” had the crowd swaying from side to side singing the catchy ditty, Fat White Family are definitely like a drug, one shot and your hooked, lovable rogues battling the elements and a modern day Sex Pistols for a jilted generation. 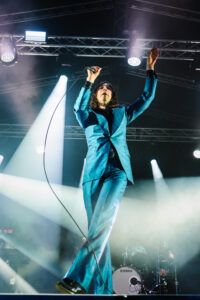 The crowd wanted more excitement, and that was about to come true. The rain held off as excited whispers came from the barriers, “do we think Bobby will wear his pink suit?” “I wonder how many tracks they will play?” “Are we actually really at a festival with real bands?” But nothing could beat the euphoria as the Scottish rockers Primal Scream adorned the stage and there he was Bobby Gillespie in his blue shiny suit, straight out of the ‘Wedding Singer’ and looking as cool as a cucumber. A soft tear to my eyes as they burst into “Movin` On Up” stage lights shining down on the crowd singing along as the music flowed. “Country Girl,” “Swastika Eyes” leaving the crowd moshing to Andrew Innes grease fueled guitar riffs and the smoldering bass sounds coming from Simone Butler showing girls can rock with the best of them , if not better.  Combined with Bobby`s punk rock tones, the bar was set high for the debuting festival. Hot on the heels with new solo offering “Utopian Ashes.” The crowd loved the exciting and energetic set, and a hard to top ending at only day 2 of the weekend.

Sunday afternoon energy had hit a low as people fled the site, eager to get home after  Primal Scream`s triumphant return to the stage in nearly two year.  Morale around the site lacked as the stragglers moped about, but the Signature stage was where the action was, mosh pits, loud drum beats and ripping shirts Pigs Pigs Pigs Pigs Pigs Pigs Pigs ( that should boost my word count) took over the stage climbing around the stage, thai chi moves and stripping away the heavy rock sounds blew the crowd into a mosh, bouncing over each other with the strumming beats and quirky vocals. Headbanging, jumping into the crowd and screaming down the mike the rock crowd were overjoyed at their offering.
Sunday headliners Hot Chip rocked up to complete the weekend in an electro pop DJ megamix, but it was the Signature stage where Sunday was made, hosting up and coming acts whilst a quarter of the ticket holders were safely tucked up in the comfort of suburbia thinking Saturday couldn’t be topped and missed an absolute blinder of a show.
You know the feeling when you go to a gig for the main band but the support act blows you 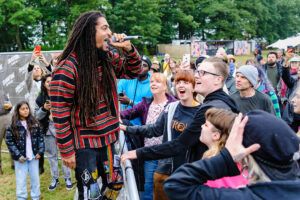 away, that was Sunday. BOB VYLAN , I’ll say it louder for those that missed it before Bobby and Bobbie, Bob Vylan, oh my!! The energy that oozed from the stage from the duo hit was extra-terrestrial. The UK based punk rock meets grime captivated the audience from the get go with Bobbie on drums giving it his all, Bobby spitting out beats like a member of the Dungeon family. There’s something magical about the duo, and one to watch for the future.
Hot on the release of last years EP ‘We Live here’ frontman Bobby stood in awe of the crowd “What you telling me fam” he beamed “for the last year I’ve been just sat in my yard doing nothing just junking punk rock.” His lyrics controversial yet powerful, they’ve a point to make and aren’t scared of anyone.  The rawness and truth light up the stage as the crowd are hyped Bobby clambers into the crowd embracing the atmosphere and energy he and Bobbie have created. The hysteria is real, a true work of art as messages are brought to the front and the rhythm hits hard. A moment of cuteness as Bobby brings his young daughter into the action, holding her high at the barrier, and the crowd have fell in love all over again.

After a phenomenal debut year let’s see what happens next, BigFoot.  Having paved the way for live music to restart.  A swift negative test result and entry was granted. We just need BoJo (Boris Johnson) to take note and pay attention to this,  than the lack of what his Cabinet has been up to.  Save the Music Industry and get live music back on the map in the UK!!

ALL artists in alphabetical order  (ALL IMAGES ARE COPYRIGH OF ROCKWELL UNSCENE MAGAZINE/INDIE IMAGES- NOT TO BE REPRODUCED OR COPIED).

Like the shriek of the wind across the desert plane, Spiritworld return to the alternative scene with their second album ‘Deathwestern’. Recommended for fans of:...
Read more
Previous articleAVATAR | An Impossible Concert Experience | Part 1 ‘Age Of Dreams’ Livestream Review.
Next articleBLOODSTOCK | With 7 Days To Go. THE FINAL COUNTDOWN IS ON! (UK)

Friday morning, Crisix unleashed a frenzy with its powerful guitar riffs and restless energy, giving way to the first mosh pit of the day...
Read more

As the ooohs and aaahs of the fireworks display die down, marking the end of another great festival weekend, it’s time to walk back...
Read more

Rising from Corona's prison like a fiery bat out of hell, Copenhell returns to the shipyards of Copenhagen to bring you the very best...
Read more