With the temperature dropping again and a frost coming over the UK, it would be a time to stay inside but tell that to Sleep Token. With their biggest headline Sold Out tour to date starting tonight at Birmingham’s O2 Academy, the chill is in the air but this is one of excitement and anticipation.

As fans line up to head inside everyone is keen to see what the UK act have to bring to the table for this show, with bigger stages it will be interesting to see what else they can give to their rituals and to the masses that come to worship.

First up is Australia’s Northlane bringing the rumble from down under. Being the only support and  with a career spanning 10+ years, it’s good to see they have been given such a substantial slot to really show anyone unfamiliar with the band who and what they are about. 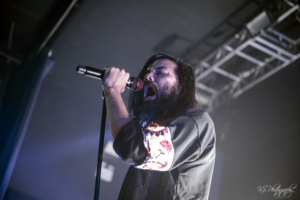 With a set list comprising mostly of songs from newest album Obsidian and 2019’s Alien, this is the first time Northlane have had a chance to show off their new tracks live in the UK and they really do show it off. You can see how keen and happy they are finally getting to play a selection of new songs to an international audience.

The mix of Metalcore, Djent and electronica elements that Northlane are known for really do highlight how fine tuned they have made their sound, while equally not being afraid to experiment with elements to add something extra. However some parts do feel like they could have got lost if it wasn’t for Marcus Bridge’s vocals which is one of the major elements that make people recognize Northlane as Northlane. 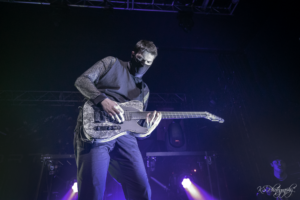 The last time Northlane came to the UK as a headline act was to promote their album Alien in 2019 so seeing them bumped down to main support was at first a bit questionable. They easily could have come here to do their own headline run but they wouldn’t have been able to play the bigger venues and sell them out as Sleep Token did.

So it’s understandable why they choose to come back as a support band after three years absence. Hopefully they will return to the UK soon with their own headline run, which is what they deserve.

To describe a Sleep Token performance in a  few words; it is a kaleidoscope of emotion and intensity. With just a simple set of two small trees, the lighting and the music are the things engaging the audience, directing us from happy, to sad and to awe. 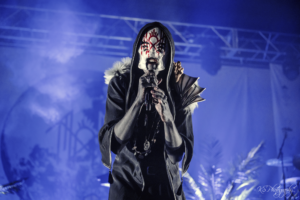 Opening the show with the two newest tracks is always risky but the crowd are screaming the lyrics to Chokehold and The Summoning perfectly.

Vessel is showing off his chops, consistently adding extra warbling vocals to songs as the band take us through their back catalogue. With each new album it’s always fun guessing what they are going to play and when a band loves to mix genres, not just per song but even half way through a track, all the songs come together perfectly.

Taking us through a variety of album tracks from Sundowning and This Place Will Become Your Tomb and even throwing in an offering from their EP Two in the form of Nazareth, you really see how Sleep Token are one of the best UK bands in the metal scene right now and are steadily climbing the ladder. 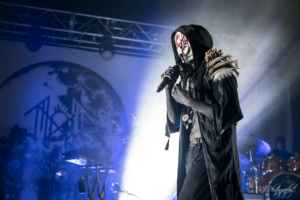 You honestly get so lost in the ritual that you forget Vessel doesn’t utter a single spoken word to the audience, with “iii” taking up conducting duties to tell the crowd when to clap and wave their hands in the air. They don’t need to repeat this motion at all, the crowd is so focused on the band they obey.

Sleep Token aren’t done in offering us new music, giving us the live debut of Aqua Regia and Granite. In contrast, the audience is deathly quiet, taking in this new music with hunger and get a nice sample of what is to come from Sleep Token’s third album.

Before the night is up Vessel has one more surprise for us, He comes out with a staff that Gandalf the White would have been jealous of and teamed with a fur cape which really stands out over his normal black robes. This really completes the look and certifies he is the Vessel for the God of Sleep, we are at his ritual and we are here to Worship.

Tonight, I find myself back at the O2 Academy Birmingham for the mighty Carnifex and Chelsea Grin, a dual headline all-American line-up show. Selling...
Read more